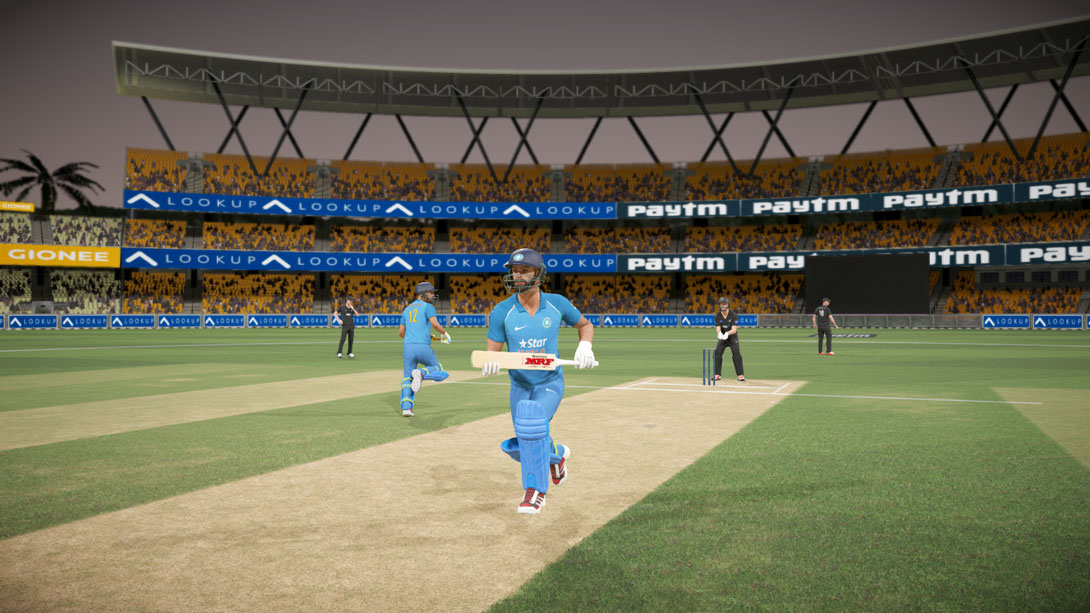 The quality of a sports game can be determined by its ability to create realistically tense scenarios which provide thrilling experiences. For cricket games, winning in nail biting run chases, forming crucial partnerships by rotating the strike, successfully defending matches by picking the right fields and bowling strategies, these are the situations that make a cricket game good enough to have a strong replay value. Big Ant Studio’s Don Bradman Cricket 14 has this ability to consistently provide these experiences for a long time thanks to it varied difficulty levels. Therefore expectations were high when Big Ant came out with Don Bradman Cricket 17.

Since Big Ant’s already on its way to release a new Cricket game with “Ashes Cricket”, I feel it’s important to review how they faired with the previous title (which Ashes Cricket is probably just a minor upgrade to). And since the new game is coming out soon, I’ll only review a few key aspects of Don Bradman Cricket 17 before I share the more detailed review of Ashes Cricket, later this year.

The Don Bradman franchise is built on customisations. Don Bradman 14 worked without licenses because it had the DBC Online Community which shared Realistic Player likenesses and Team Layouts, something that compensated for the lack of licenses in the game. DBC 17 takes this is a notch higher with the inclusion of a “Logo Creator” and a Stadium Creation tool. 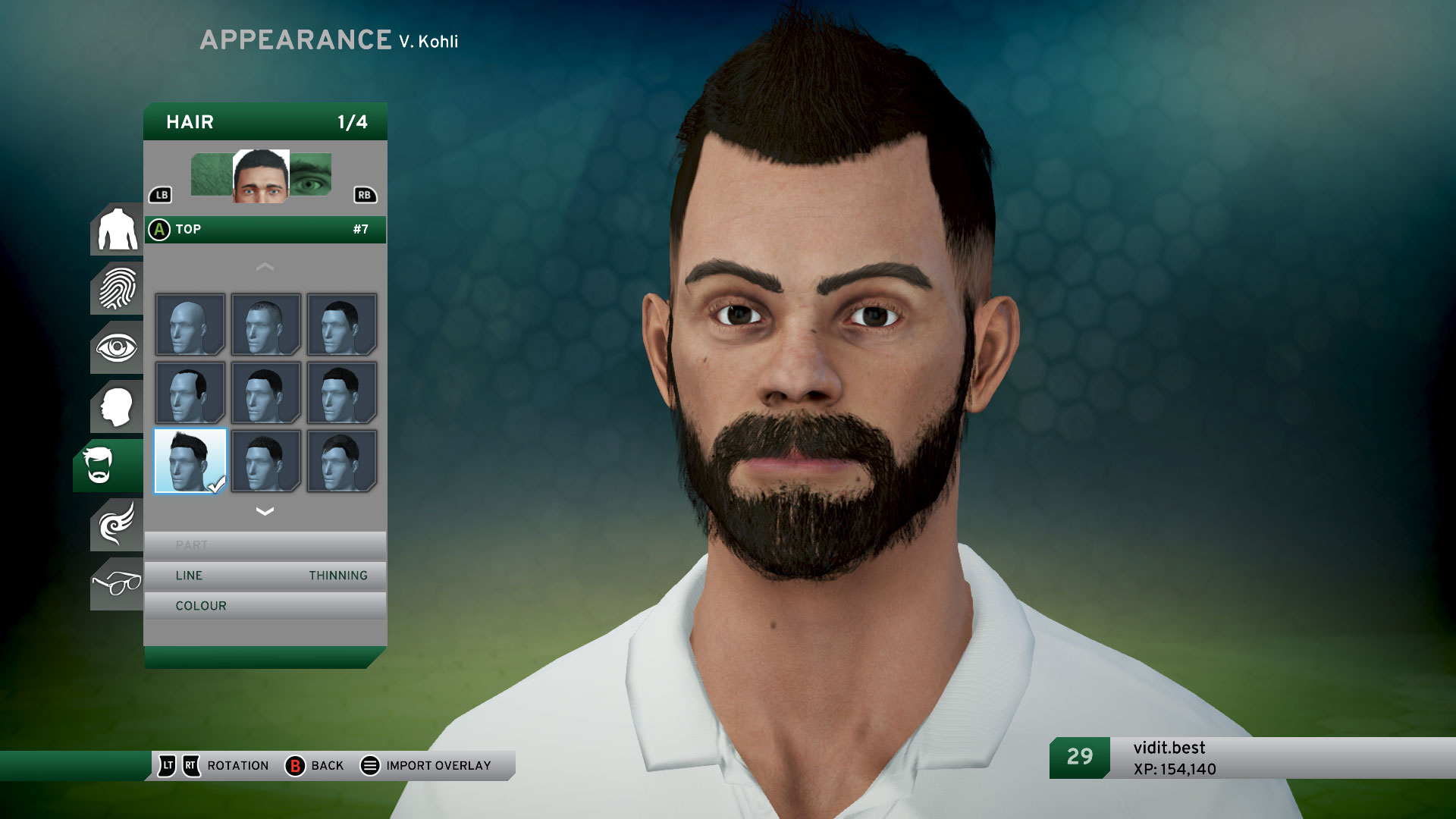 The Logo Creator is basically a blanket term for an SVG editing tool Inside the game. You can import your SVG graphics to it and they can act as your team emblem, shirt sponsors, bat and kit sponsors, Stadium Advertising boards or even Jersey Artwork. 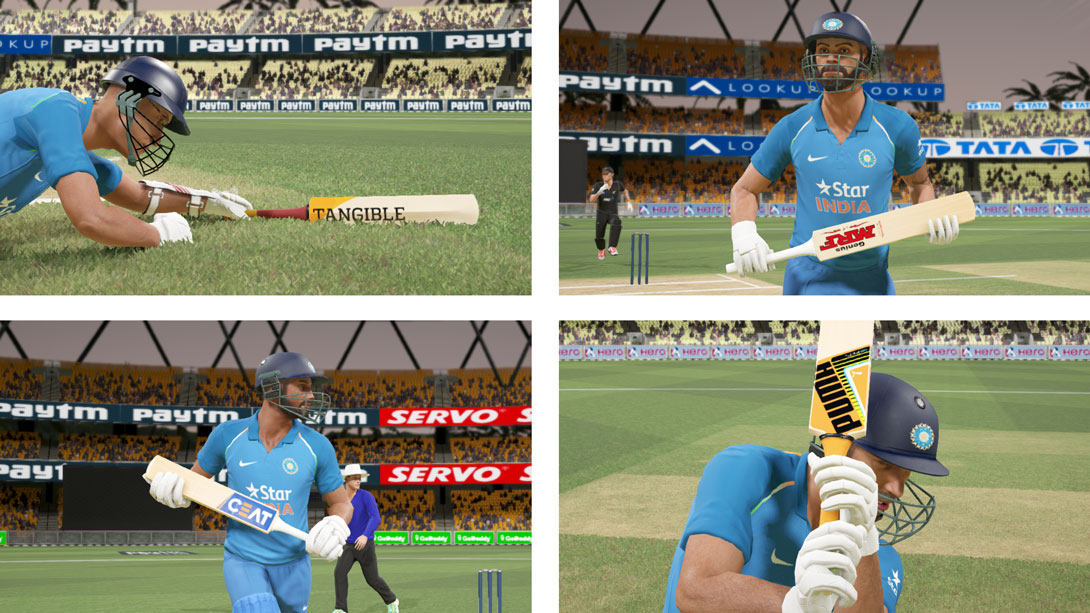 Because you can create custom logos, the ability to create custom bat stickers is also an option. You can place a multitude of logos and graphics on your bat to make it look whatever you want it to look like. This means you no longer need canned sponsors! Another nice addition to the game.

Team Kits also take advantage of the custom logo creator and makes it easier to create custom kits with a greater variety of custom graphics.

To be honest though, the SVG editor for the logo creator isn’t very good. It’s incredibly difficult to draw anything relevant to the game by using the editor’s default tools. They’re just too simple and slow to accomplish that. But what saves the SVG editor is its ability to import files. So you can create your artwork in Illustrator and import it in the game. Even this feature comes with some caveats though, the in-game tool doesn’t support translucent elements, text elements (you’ll need to convert it into an outline to import text) and doesn’t always copy complex Bézier curves accurately. Tldr; If you don’t know what you’re doing when it comes to designing the graphics for in-game customisations, I suggest downloading from the online community instead.

What’s way more thought out though, is the stadium creator. The stadium creator is much more easier to get around, you can add stands, lights, pavilions and all the paraphernalia you’d associate with a Cricket stadium to create decent replicas of existing grounds (provided they don’t have a lot of custom architecture). The interface is a simple select and place action for most of the stadium elements. I found it especially fun to be able to construct the stadium for the cricket club that I used to play cricket for! I was also able to create real world replicas for some of the other stadiums around the world. Another fun part of the stadium creator is that you can have your own brands show up on the advertising boards and pitch markings. So yeah! LookUp and Tangible Apps were able to make their presence felt too! 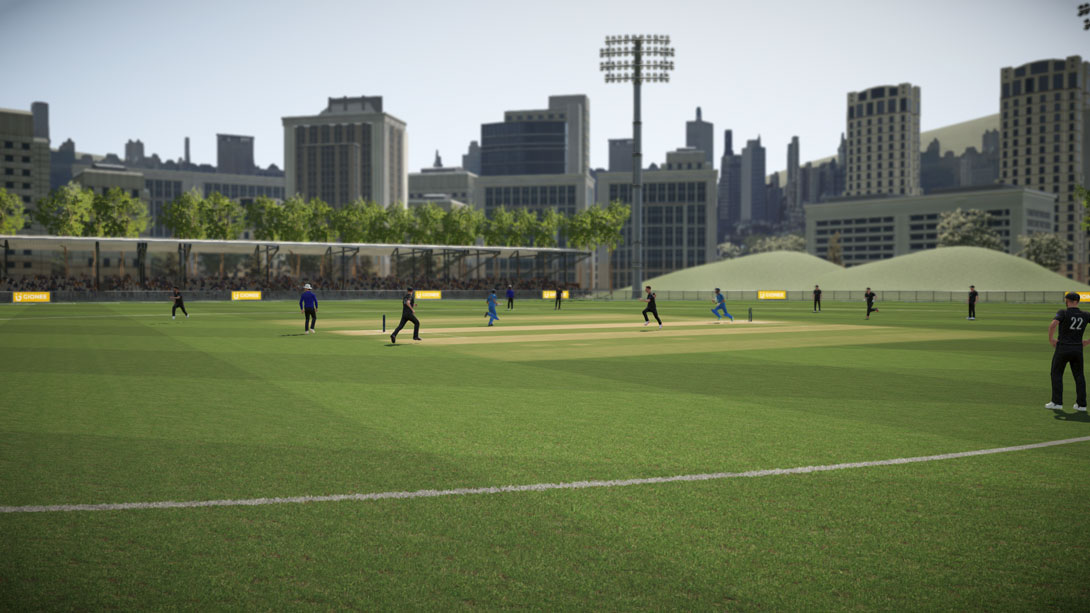 Customisations aren’t just restricted to kits, players and stadiums though. You can also set the level of difficulty on a more granular level. Allowing another host of difficulties to tweak and play the game with. I personally found this to be a bit of a mouthful, These are just random knobs that you play around with and not know how hard it’s going to be for you until you get to the field, and with the tweaking being in-game, this has the ability to make or break your match. 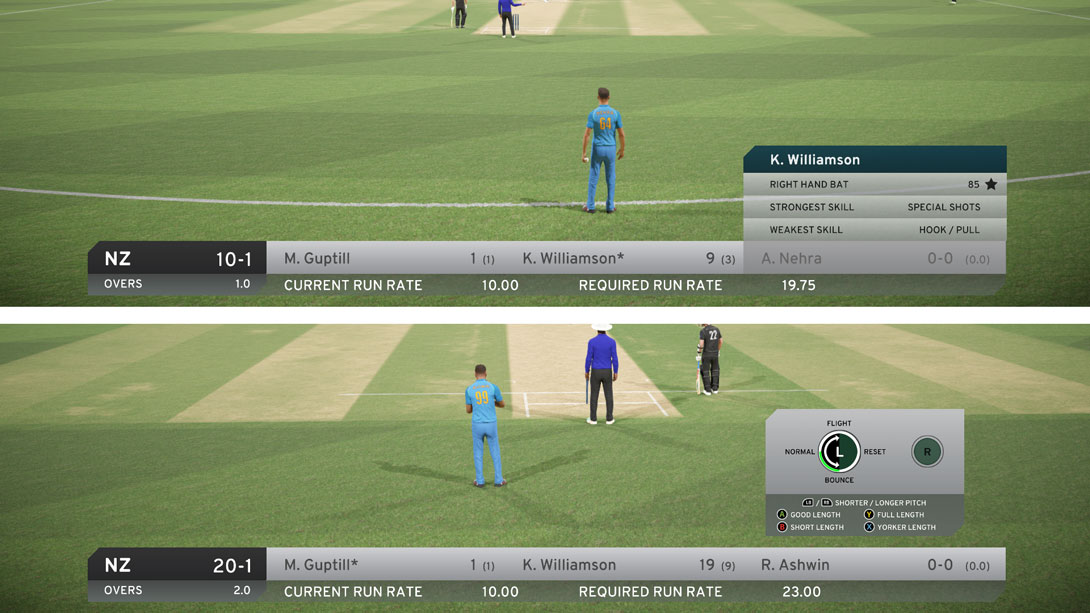 The in-game information has also improved from the previous game. You can now see a batsman’s strengths and weaknesses along with his current stamina and confidence. You can also get projected scores, manhattan graphs, worms and partnership information. A pleasant tactical addition to the game.

While the Bowling and Information control has improved, Batting and Fielding have deteorated significantly. When the game first released it was impossible to play shots on the back foot, multiple patches have fixed that since then, but glaring bugs still remain. Ever so often you‘d find batsmen edging a square cut and ball flying over the covers, or the batmen simply moving millimetres out of the crease but then going further away only to walk back into the crease (you know that’s an instant stumping if you are batting against spin bowling). There’s another ‘feature‘ to the batting controls which enables batsmen to move about anywhere on the pitch to take their stance and play the shot. So you can stand a good two feet out of the crease outside the off stump and play every shot to the leg side if the field is off-heavy. This, on surface is pretty realistic. We’ve seen Mathew Hayden stand far from the crease against fast bowlers, players have also stood on the off stump to mock fast bowlers line and length previously, So such an addition to the game should be welcome, but as it turns out, here’s where the controls get too Real, you want to be able to restrict batsman movement just to create a more competing gameplay, it’s just too easy to move ahead of the crease and start slogging, making it unintuitive to look for singles When trying to build a partnership. I’d love to have some of the un-real constraints to be back. 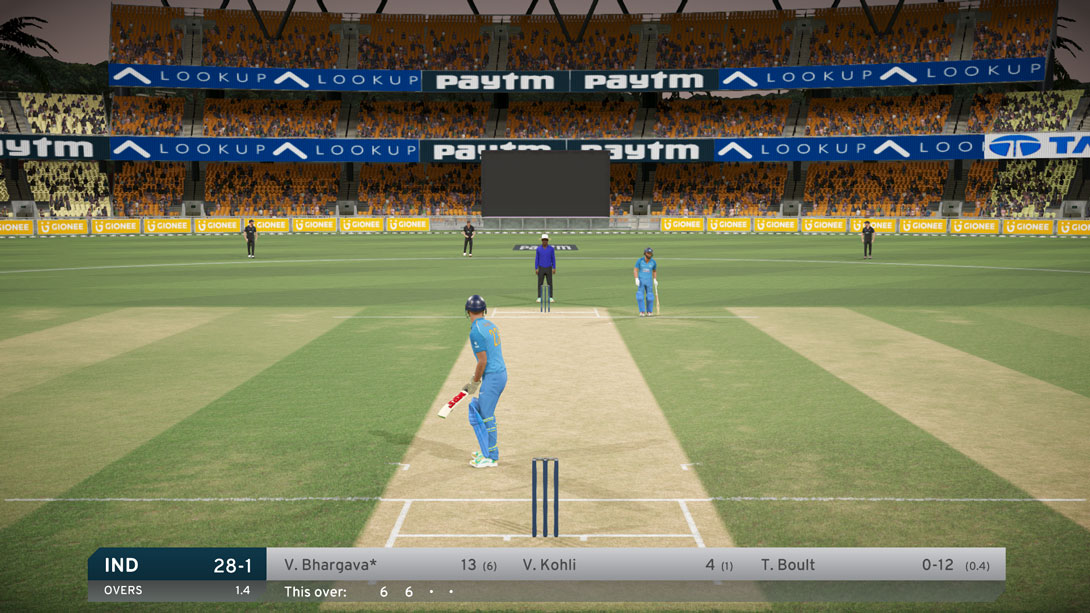 Bugs persist in the fielding department as well. One of the glaring bugs is the in-ability for fielders in the deep to respect the boundary lines. They just move in and out of the boundary line when trying to stop a boundary, you can’t rely on them to save one for you. Fielding animations are unreal, catches can appear almost superhuman with the fielders diving quite far and abruptly to take a catch. Fielding is by far the worst part of the game, and it’s so bad that I’ve switched back to playing Don Bradman Cricket 14 on multiple occasions just because the fielding never let me have much control over the match while bowling. 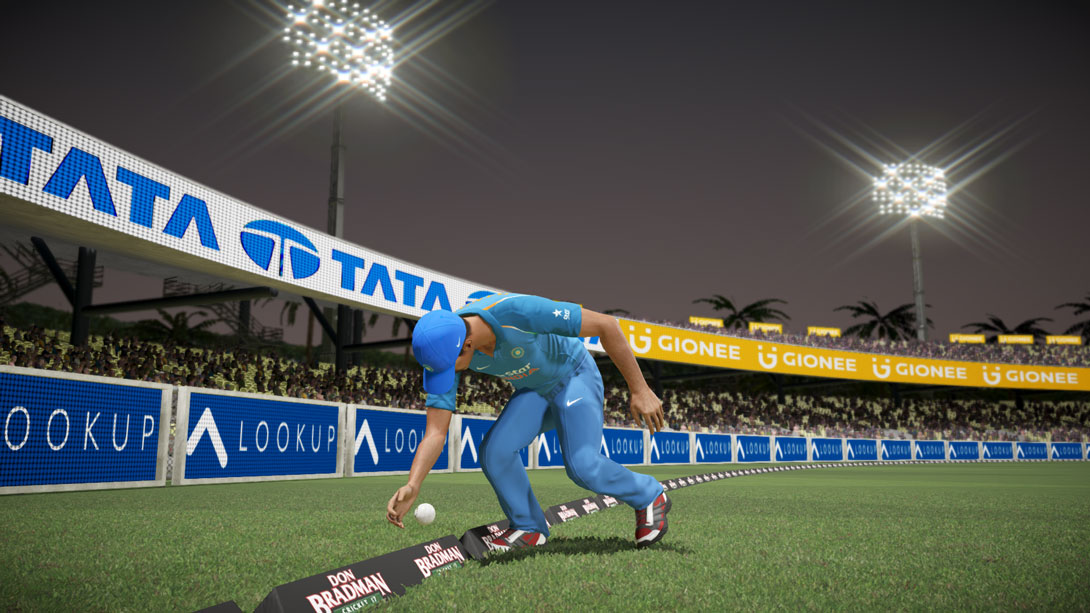 I mentioned at the starting of the post that a good sports game can be judged by its ability to put you in realistically tense situations which require your knowledge of the game to win the matches. What I found with Don Bradman Cricket 17 is that more often than not the games were one sided, and when they were challenging, they did give that adrenaline rush, and quite often threw up interesting scenarios to handle. So I’ll give that to Don Bradman Cricket 17, the Core of the gameplay is still solid enough to provide a thrilling experience, even if it’s only rare.

If there’s anything that can be worse than Don Bradman Cricket 17’s fielding, it’s the in-game commentary. Two unknown commentators blurt out random phrases at set time intervals. There’s no correlation between what they say and what’s happening in the match. A bowler might go for 20 runs in an over and they’d still be calling it a “maiden over” or a great over for the fielding side. Someone may well be scoring his 20th international hundred in the game, but to the commentators it’s nearly always a century on the debut, with a bright future ahead of them. Right Arm Medium bowling the next over? He’s just too quick according to the commentators. If you felt Don Bradman Cricket 14’s commentary left a lot to be desired, wait till you hear the commentary in this game. You might want to rip your hair apart!

The problems don’t end at the gameplay though. Arguably a bigger problem with the game is its graphic and frame rate optimisations, which aren’t up to the mark on the PC. While the graphics have improved from the previous game, performance is poor on the lower end of the supported graphic card spectrum, but even with significantly better cards problems there are constant frame rate drops. The game just isn’t smooth enough if you aren’t completely specd out. 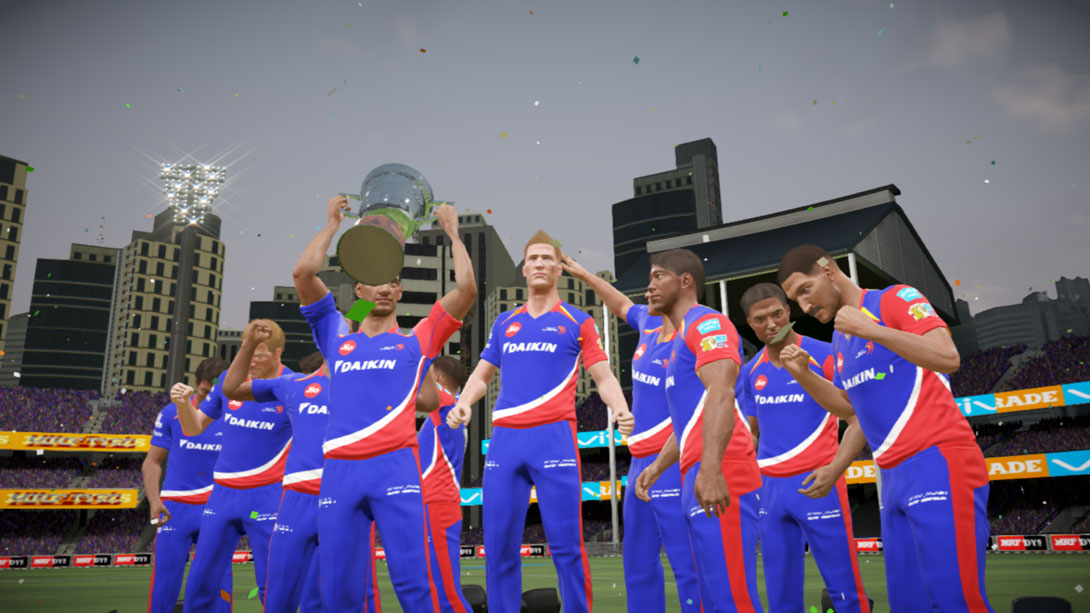 I also found the PC version to be a bit buggy. There’s this constant network bug which shows up every now and then even when you are connected to the internet. Another one’s where the text rendering is completely destroyed when switching between the game and other programs on the computer. However these are minor niggles in a game which has bigger problems to address in it’s next release. 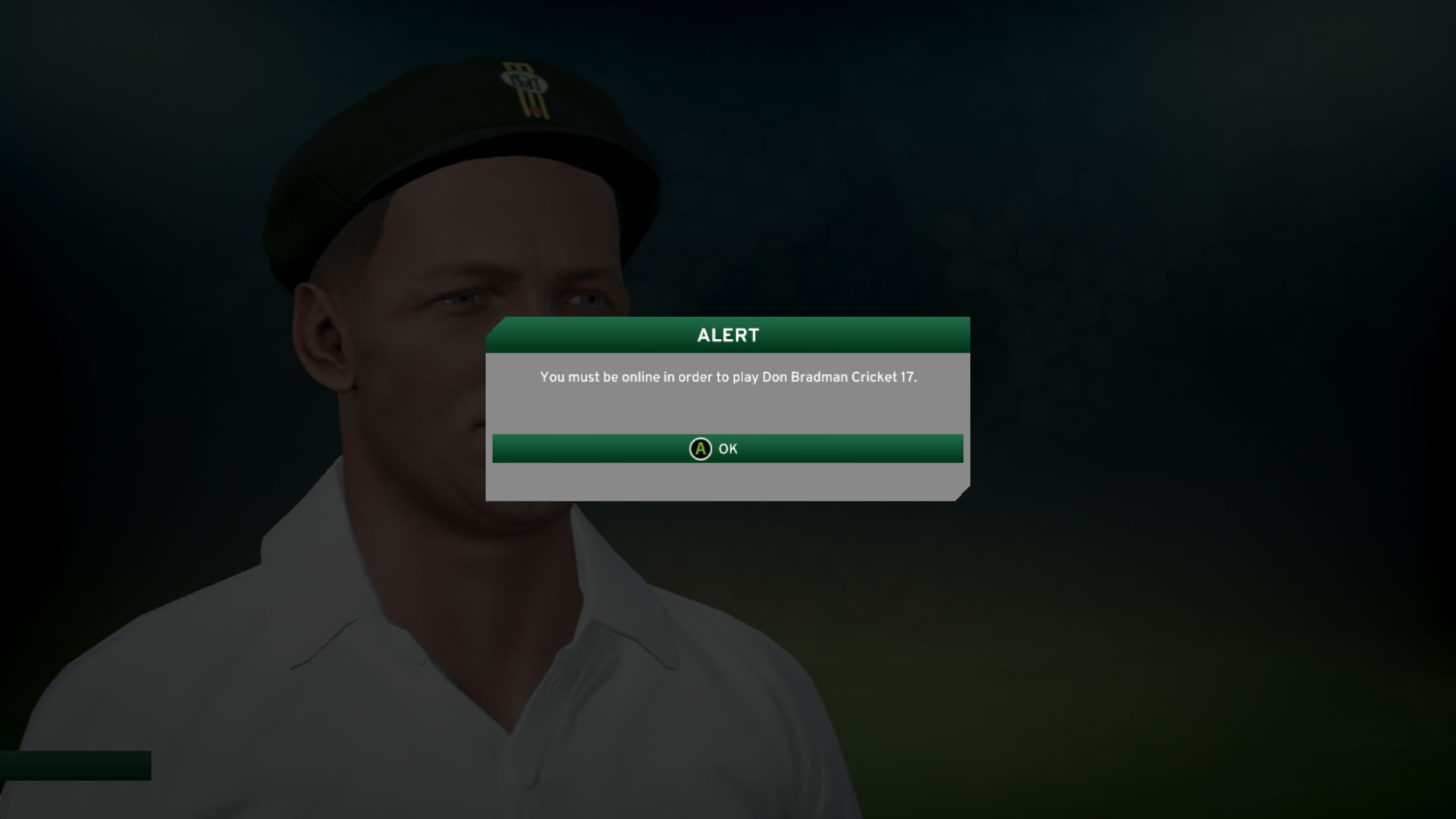 Don Bradman Cricket 17, for all its bugs and rough edges, is still a solid cricket game. It’s core gameplay fundamentals are still solid. And while this may not be Big Ant’s best release, the company has this great quality to listen to and work closely with Cricket game enthusiasts and the problems I’ve discussed in the Review were put up on forums quite a while back and many of them were acknowledged by the creators. What this means is hopefully, much of the games problems will get fixed in the next release i.e. Ashes Cricket. 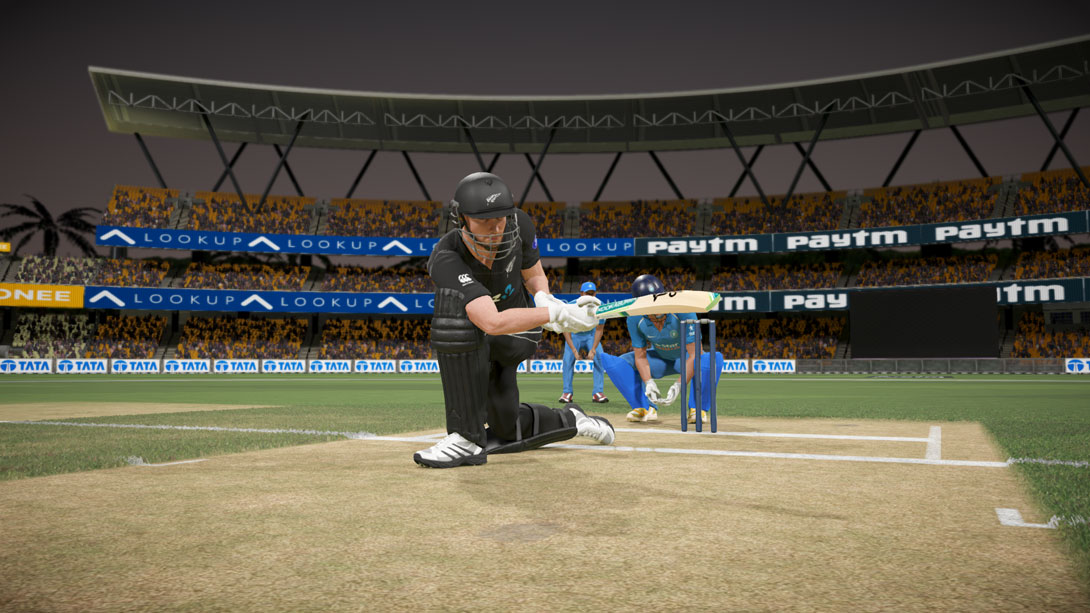 A little bit about Ashes Cricket: Big Ant’s releasing a new Cricket game this year, this is a pleasant departure from their 18 month development cycle. A new cricket game every year is something I’ve been looking forward to for a while now. Ashes Cricket as the name suggests is a game with fully licensed players, stadia and equipment from Cricket Australia and English Cricket Board, along wiht an improved commentary team including Michael Slator. Licenses, while a pleasant addition to the game, are hardly what matter in Don Bradman Cricket, you could get much of that as Downloadable Content from the community anyway. What I’m more interested to see is how much has the game improved upon from the previous release and how does its new Mo-Cap technology work for cricketer’s batting stances and shots. If done rightly, Ashes Cricket could well be the best Cricket game to come out. Either way, I’ll offer an in-depth review of the game after it comes out in November 2017. 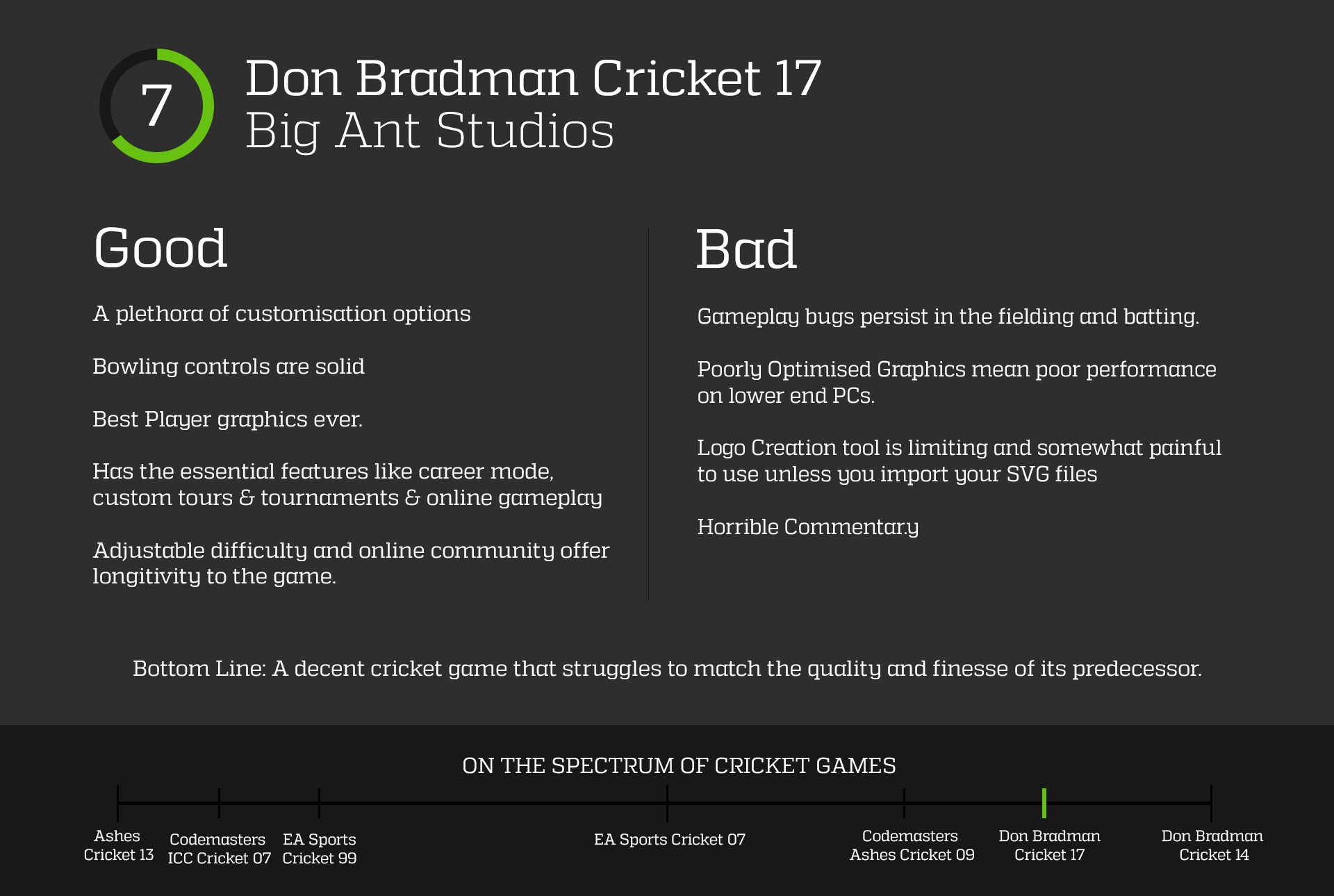