The home button offers a clear exit path for the user to exit an app. It’s a comforting experience, a case of clear of navigation, that the iPhone has always had.

Last week’s accidental firmware leak all but confirms an edge to edge phone, with a valley (a notch is a more pointed cut) at the top and a rounded rectangular clipping at the bottom. This makes for an interesting user interface and navigation challenge: What would the famous exit path for iOS users look like if it were to be based on software?

Here are a couple ways in which apple currently uses a virtual navigation.

Based on what Apple’s currently doing with the interface, I have a few ideas as to what that could look on the new iPhone. 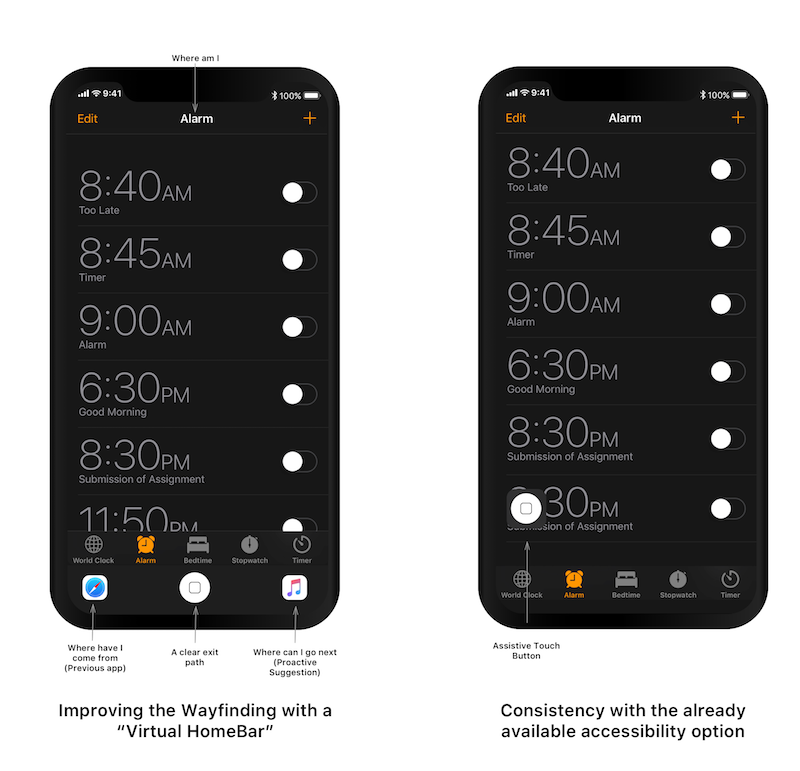 Idea 1: Improving the navigation with a virtual HomeBar
A home bar like functional area would not only offer a home button but improve upon the device’s navigational structure. Basically, if you go by Apple’s HIG, a good navigation is based on three points :

and fourth, offering a clear exit path to the user.

The home button fits in to provide an exit path. With it going virtual, there’s room to do more with the navigation. Look at the CarPlay interface for example, it shows the recently used apps on the right as a way to quickly access them. The iPhone also offers Siri-Suggestions on the lock-screen to quickly launch an app. A virtual home button could offer all these in a single tray to offer better navigation to a user.

More than just improving the navigation, something like a virtual home bar also puts the iOS proactivity function to be at the front and centre of the interface. Intelligently notifying users to use the app they’re most likely to use next. 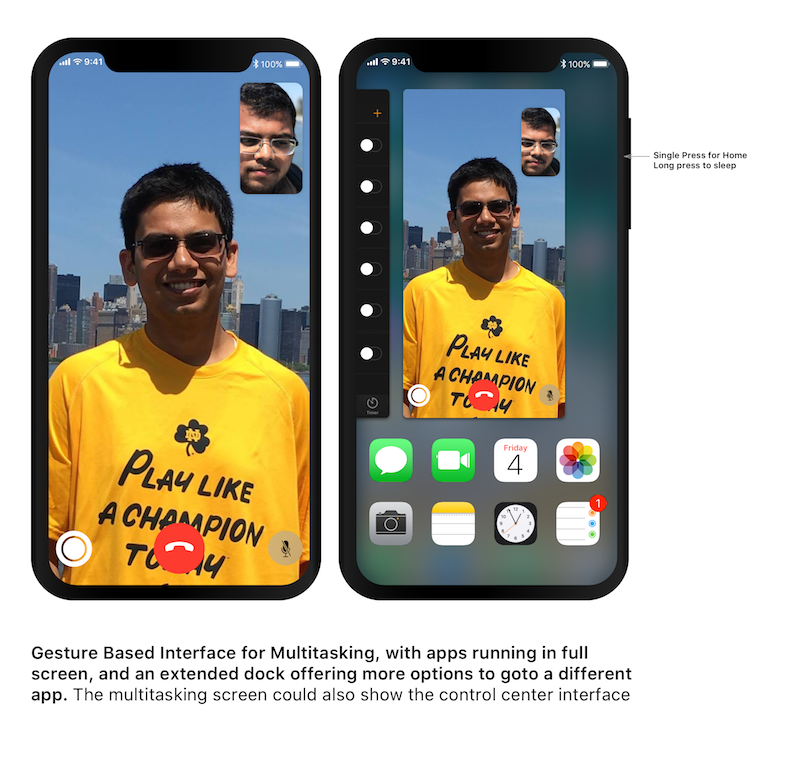 Idea 3: Gesture based interactions for Multitasking and the Sleep wake switch for the HomeButton
If rumours are true, the next iPhone will work on face detection mechanisms to recognise a user’s identity. That makes the process of unlocking a device, more proactive, with the phone doing all the heavy lifting, where as the user just taps the phone, raises it, or presses the sleep/wake button.

Imagine the scenario, press the sleep/wake button, the phone’s IR camera wakes up and recognises its you, and goes directly to the home screen, instead of the lock screen. The concept of a lock-screen is gone. If you’re in front of the phone, you don’t need to go through that screen anymore. At that point the sleep/wake button is no more a button to wake your phone to a lock screen, but the button that takes you to the home screen. It makes a lot of contextual sense in that case to be the exit route for when you want to exit an app. A single press to home, longer press for sleep and even longer to shut down, wouldn’t be a bad idea.

To be honest, All this is just conjecture, Apple could introduce a completely radical user interface for a virtual home button, or just make the assistive touch interface as the new normal and not even talk about it, but it’s a very interesting design problem to solve. And one that’s opened the possibility of rethinking the core iOS navigation for the first time in all these years.