Vidit Bhargava
On a recent vacation to Venice, California, I had stumbled upon Snapchat’s old headquarters on Venice Beach. It was a white house with a blue rooftop that just blended in with the rest of the neighbourhood’s building. Also, I found the unique vibe and culture of Venice beach to be a good opportunity to understand what influences snapchat’s unique experience, and also to understand what design means to Venice and what drives the popular culture at the famed beach.

One of the things I’ve noticed is that Snapchat is an extremely culture driven company. There app’s design and graphics are very opinionated and while their user flow may have some issues, there’s a distinctive colour palette followed and a unique visual styling followed by the app. Venice Beach has a strong influence on the design, just roaming on the boardwalk, I felt if there’s anywhere that snapchat felt home, it was this place, it’s a perfect playground for snapchat’s use cases and a great inspiration board for anyone starting to design at snapchat.

Venice Beach famous for it’s eccentricities has a bunch of activities that happen every day, these events are short and fun, they gather your attention for a while but hours later there’s something else happening that gathers your attention.

This is just the kind of content that fits into the Snapchat narrative of photos, videos and stories being ephemeral. If I look at these events as a locale and not a tourist, none of these events would capture my attention for a long time, because there’s so much happening everyday.

Snapchat stories on the Venice Beach would be the best representation of the concept. Ephemeral and there’s always something new to share.

In fact this translates not just to the events but to the pop-up shops, that sell all the interesting goods near the beach. Even these shops keep changing over the course of the day. There’s very little at Venice beach that feels permanent and Snapchat’s inclination towards the ephemerality of the content shared by it’s users doesn’t feel coincidental. 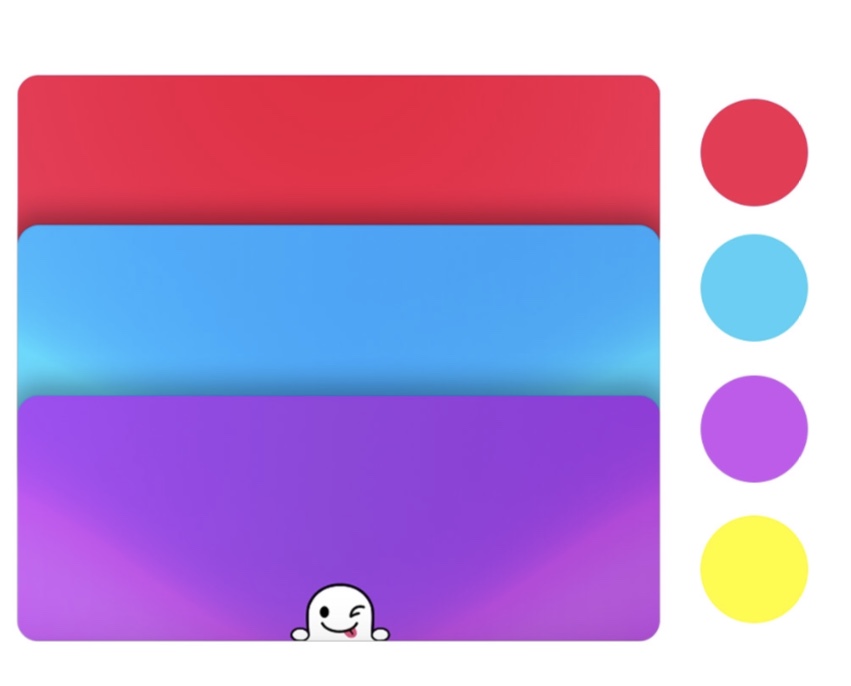 If you were to walk a bit further towards the city from the boardwalk, you’d be greated by more permanent shops, a ton of street art and a few residences. What stands out though is the colour. The street art, the shops and even sometimes the rooftops, they hall have this distinctive colour palette that it strikes out. Move a little further towards the beach, and even the beach sheds are soaked in the vibrant colours of Venice Beach.

A look at the snapchat app, and the choice of colours strikes as familiar to much of what’s used in the neighbourhood. 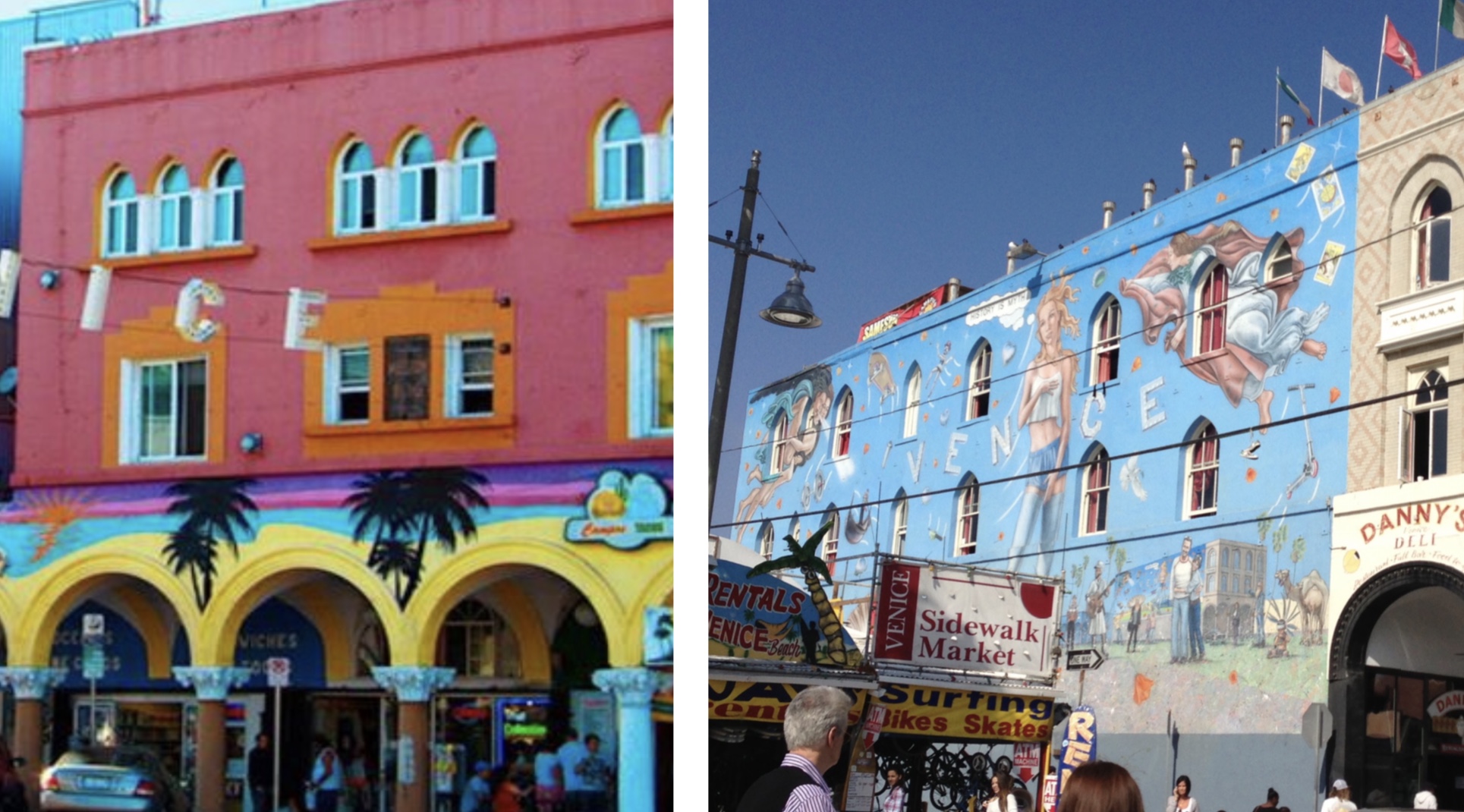 Moreover, there’s this scrappy vibe to Venice Beach which doesn’t feel super-artistic and is far from minimalism. There’s a lot of street art, a lot of scrappy -hacked together art around the beach. A glance at the sticker dock in snapchat or at the newly released map feature or even the integration of bitmoji into the app, and you’ll see the scrappy, hacked together feel seep into the app.

Coming back to the shops near the boardwalk there’s one by Snapchat as well. And it’s just a garage which holds a claw machine to get a snapchat ghost toy and a snapbot vending machine that lets you try the Snap spectacles. It’s just a little better than a pop-up stall on the boardwalk opposite it. If anyone were to make them shut their garage, the snapbot and the claw machine would find home very easily on the boardwalk.

Now, Snapchat’s could have sold their glasses online from day one. But they set up these snapbot pop-up booths which’d turn up at random places around the city And soon be gone. If that reminds you of how the Venice Beach’s pop up stalls, you aren’t alone. These snapbot are based on a similar, even if a little more permanent, concept. Much like the Venice Beach stalls, you’ll probably not see a random snapbot lurking around at the same spot.

Giving it back to Venice Beach – Influence and Work

But Snapchat doesn’t just benefit from the Venice culture, there’s a lot that it contributes to the neighbourhood as well. 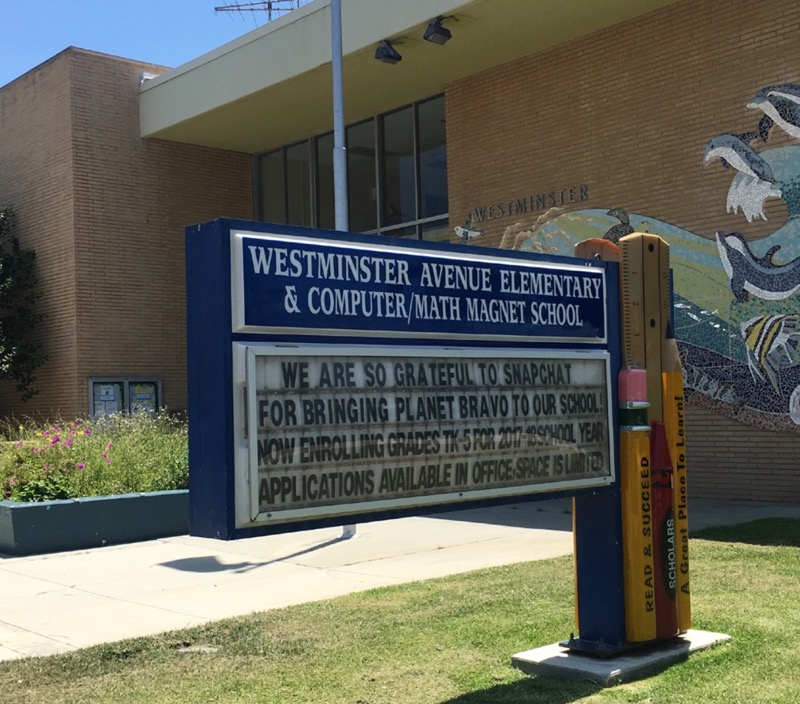 Sometime back earlier this year, Snapchat partnered with an LA education firm called Planet Bravo, to bring computer education to an elementary school in Venice. The Elementary school now thanks Snapchat for this genoristy on the display at the front gate.

But Snapchat’s influence has been a bit beyond brining computer education to Venice. It’s had an impact on the real estate of the place as well. Snapchat’s old headquarters which weren’t nothing more than a beautiful blue beach house, are now eclipsed by newer offices which look a lot more like a Silicon Valley office building, and they do sort of standout against the strong colourful vibe of the place and I fear there’ll be more startups mushrooming around the neighbourhood. But I hope they’d embrace the Venice culture in a similar way.

Having said that, while Snapchat’s offices stand out and can be distinctively seen from far away, they never feel out of place. The company does such a good job at embracing the neighbourhood’s culture that it never feels out of place.

Much like what Silicon Valley was to companies coming up around the 70s, Venice is to Snapchat. It’s a very different culture from Seattle or the SF Bay Area and that’s why Snapchat’s actions feels different from much of the valley’s startups.