Lots of rumours this week about an unannounced Apple product that we’ve (at least I) have been waiting for years. But if the rumours are true, it’s not really the AR headset people wanted to see from Apple, the one that’s like a wearable pair of sunglasses. But instead it seems like it’s going to be a Ski-Goggle styled Mixed Reality headset.

I’m far less excited about VR than AR to be honest. It’s another form of escapist entertainment. It’s fun for short bursts of interaction but nowhere near as important as Augmented Reality or this idea of ubiquitous computing.

Augmented Reality promises to change the landscape for navigation, translation and object references. (Imagine being able to see how a table looks like in your room, before buying it) but it also promises to move these things away from the bounds of a rectangle to being overlayed on the real world. Which in itself is an exciting proposition, since for the entirety of computing history we’ve been bound by screen size and this offers an opportunity to break away from it.

And Apple’s efforts have also been in this area. ARKit, RealityKit, App Clips and even SharePlay are all pushing the rectangle bound app into an environment where the the trigger to launch an app’s functionality is not the action of tapping an app icon on the iPhone’s display.

App Clips can trigger an app’s feature from physical objects (NFC Stickers) without needing to download the app. Friends can listen to songs from a music streaming app, together using SharePlay in FaceTime. RealityKit offers proximity triggers to interact with 3D objects. The Find My app’s Nearby interface is a glimpse of how UWB chip powered objects can interact with software.

All of this makes sense for Augmenting our real world, not isolating ourselves into a virtual reality.

I think the rumours have it the wrong way. I think if we do see a headset from Apple it’s going to be focused on Augmented Reality with Virtual Reality being a subset of that augmented reality. You can hop into a virtual world if you want to, but by and large this is going to be about the real world and augmenting it.

The only problem? We’re yet to see how wearable this device is going to be and that’s extremely important. No one wants to go shopping for groceries wearing Ski-Goggles. So if the first device is bulky, it could greatly limit the device’s capabilities.

Apple's M2 Pro Video Announcement If I am being really honest, this really just needed to be a press release. All I learnt from the video was: Mac Mini has been updated to get M2 and M2 ProMacBook Pro has M2 Pro and M2 Max, and a better battery life. 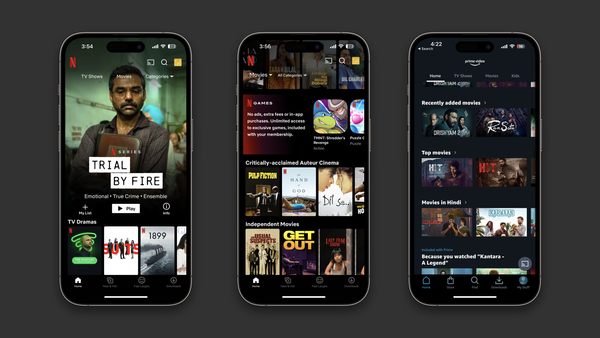 Streaming Service Navigation relies on showing a lot of options at once, but what if it were simpler?

macOS Ventura introduces a new design to display forms. The design looks  like this: As you can see with this design, it's got a couple of glaring of issues when used in wide width situation: There's too much space between the title and value. This makes reading the values veery