Vidit Bhargava
Back in 2014, with the announcement of the iPad Air 2, Apple demoed Pixelmator, the photo editing app that wowed users with its retouch tools and an easy to use iOS-first interface, which made it an ideal prosumer application for photo editors and people looking to do more and more of their computing tasks with the iPad. However, Pixelmator was no photoshop. There were a lot of effects, settings and tweaks that photoshop offered on a mac. While Pixelmator didn’t eventually widen its offerings, another big player did. Serif, the makers of Affinity Photo, released the software for iOS this month. And with a complete pro feature set.

Usually when there’s a piece of “productivity” software for the iPad, it’s either easy to use, but limited in the feature set it provides, or it’s professional grade but one that’s based on an interface for the mac. The workflow isn’t quite “made for the iPad”, interactions that are more ideal for a mouse based device are pasted on a touch-device, but never really translate well And eventually we have a product that could theoretically do the desired task, but it would be much slower and more combursome, and eventually not worth the switch. 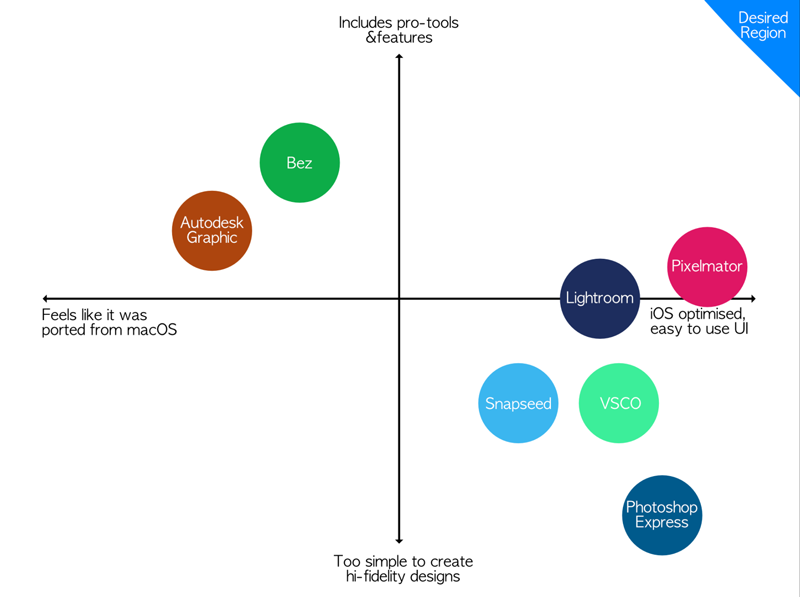 Where would Affinity photo fall in this spectrum? It needs to be iPad optimised and professional enough to be a worthy switch from photo editing on the mac to the iPad.

Affinity Photo offers a host of selection tools which are extremely precise. But more importantly they are tools optimised for iOS. They’d be faster on iOS than on a mac. If you’ve ever used design tools on your computer one of the trickiest part of the process is using a selection tool on a complex part of an image. On the iPad, combined with the Apple Pencil the selection tools on affinity photo provide a quick way to select complex shapes. I particularly liked the refine tool, which allowed me to get a rough cut followed by a precise one. 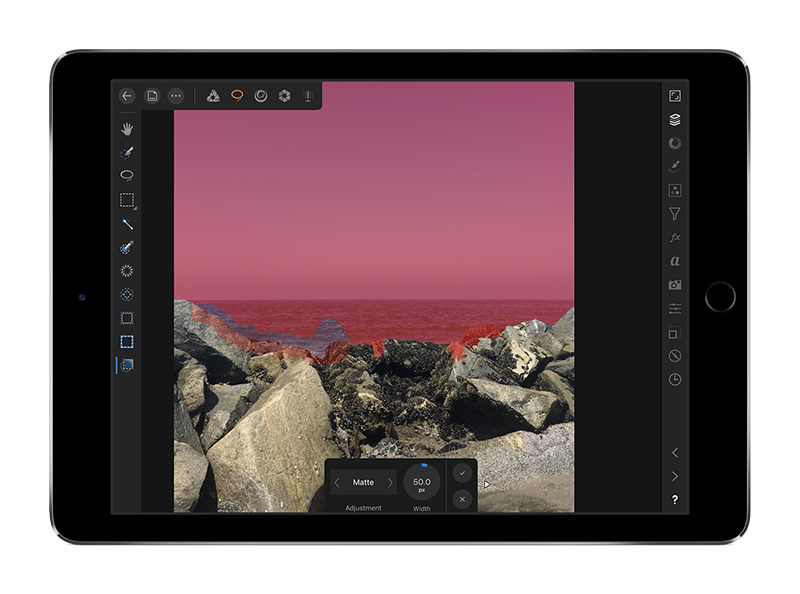 If you were to start image editing today, you’d have a far easier time doing a lot of this stuff on Affinity Photo instead of photoshop, solely because of selection tools. They may not be technically superior but they are far easier to get a hang of, than something like photoshop on a computer, which takes some time to get used to.

The layer management on Affinity Photo includes things like the ability to mask objects, which is a happy inclusion in the app, since there are very few on iOS that’d actually do it (Apart for the the iWork apps, and Bez, I don’t recall many doing that).

Selecting Multiple Layers offer Boolean operations that allow for creating complex objects and shapes. There are Layers effects like Bevel and Emboss, 3D, Shadows, Glows, Overlays, etc. to provide a good host of editing opportunities to create decent renders. In my experience with the software, while these may not be efficiently grouped (Boolean Operations are in the three dots menu on top corner, blending effects like multiply, appear in the three dots menu in layer manager, and there’s a separate menu for layer effects which contains the shadows and glows etc. ) , they do offer a good catalog of options which were otherwise not available on iOS previously.

Is it professional enough

With enough tools to offer, Affinity Photo certainly gets the pro factor right and with decent import and export support, Affinity Photos is certainly one of those apps, which even if they don’t constitute of a primary workflow, would make sure you don’t need to fetch your laptop every time you want to tweak a shadow change the tone balance of an image you just clicked on your iPhone.

It’s not as though there haven’t been apps in the past that could do this sort of stuff, the name of Pixelmator comes up often, when we discuss about photoshop like on an iPad . However, Affinity Photo’s feature set pretty much blows all its iPad competition out of the water. You could look at it this way, If Pixelmator is GarageBand, Affinity Photo feels a lot like Logic Pro.

If Pixelmator is GarageBand, this feels more like Logic Pro.

Precision is easy to achieve 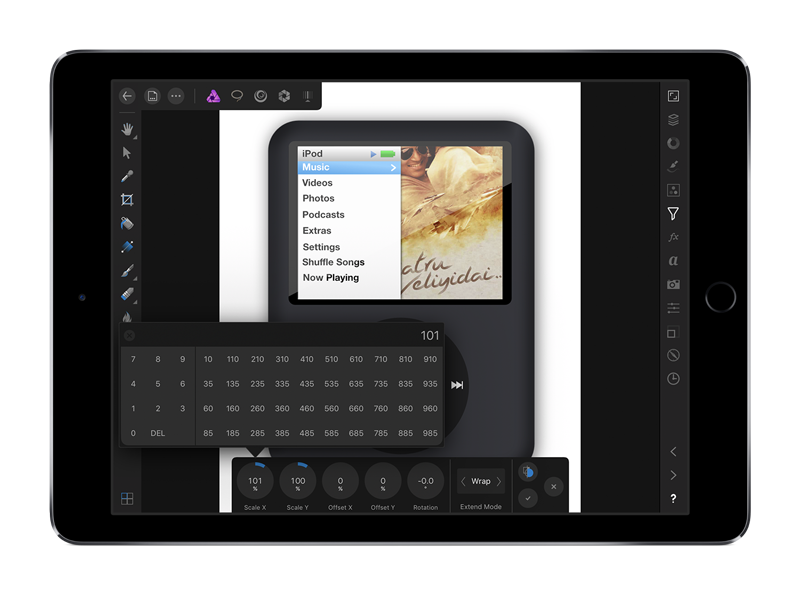 One of the nice things about the Affinity Photo interface is the fact there are enough precision tools to keep the app from being handicapped while maintaining an iPad like interface. Moreover, the interface for precision tools is really nice, with preset suggestions for values which are most oftenly used, along with a number pad for more control. 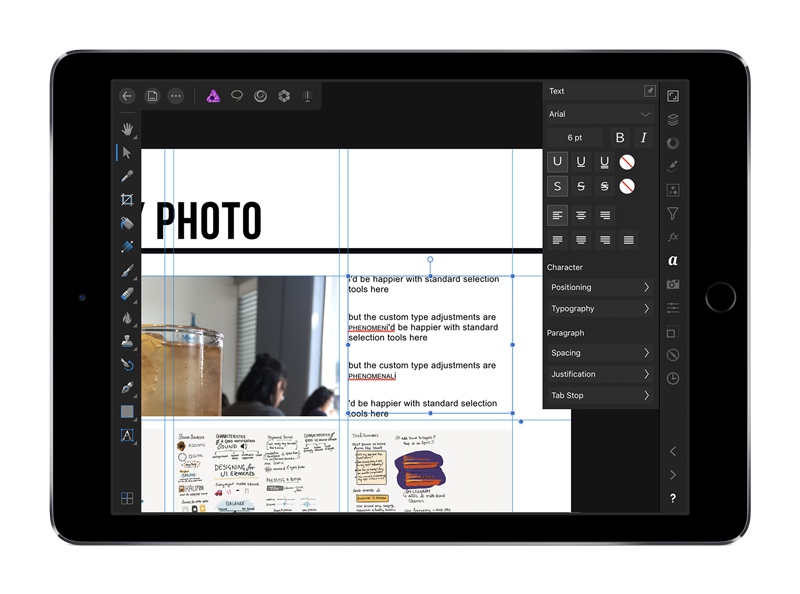 There are enough typographic options in here to keep a type nerd engaged. You can change the tracking, leading, kerning, or enable ligatures, small caps, subscripts, super scripts, et all. If you are someone who cares about type, there are enough options to make things look great. Add to that, the makers of the software have added a range of custom typefaces as well. 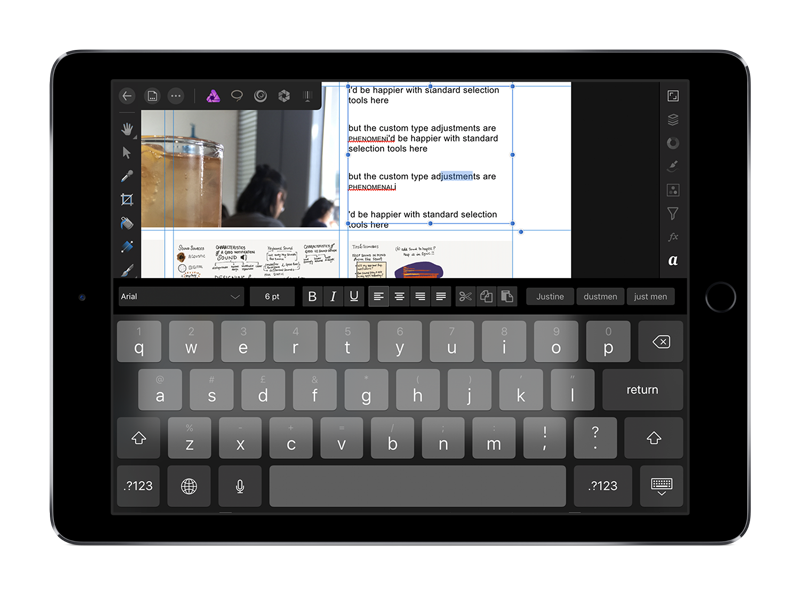 However, typing is the worst feature of Affinity Photo. Even with a host of options, typing text on Affinity Photo is a horrid nightmare. Given Affinity Photo’s utter disregard for platform conventions, they’ve built in a custom clipboard for their app, which allows only the text from their app to be copied and pasted. A custom clipboard, text selection tool and the absence of proper quick type suggestions, makes the experience feel flaky and half baked.

Add to that, if you were hoping to use Affinity Photo to create miniature fliers or posters on the go, when you export in PDF, the text is rasterised! Making it unselectable on any other editor. Good luck with Affinity Photo, if you plan to right more than a couple of lines Of text. 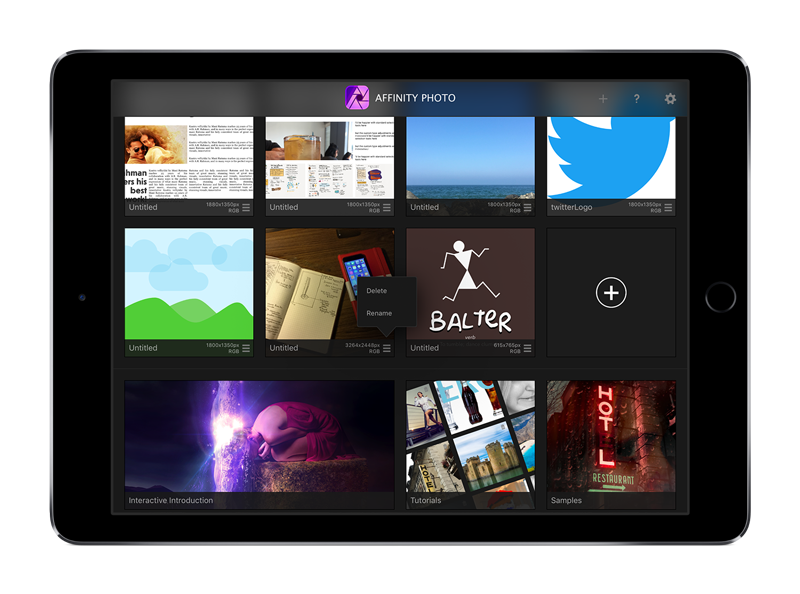 Unfortunately, Affinity Photo’s disdain for platform conventions leads its UI into making a mess of simple things like deleting and renaming files. Infact much of Affinity’s interface is so far off the iOS paradigms that it feels almost alien to the platform at first. While some of these decisions do pay off, Most of them feel overdone. 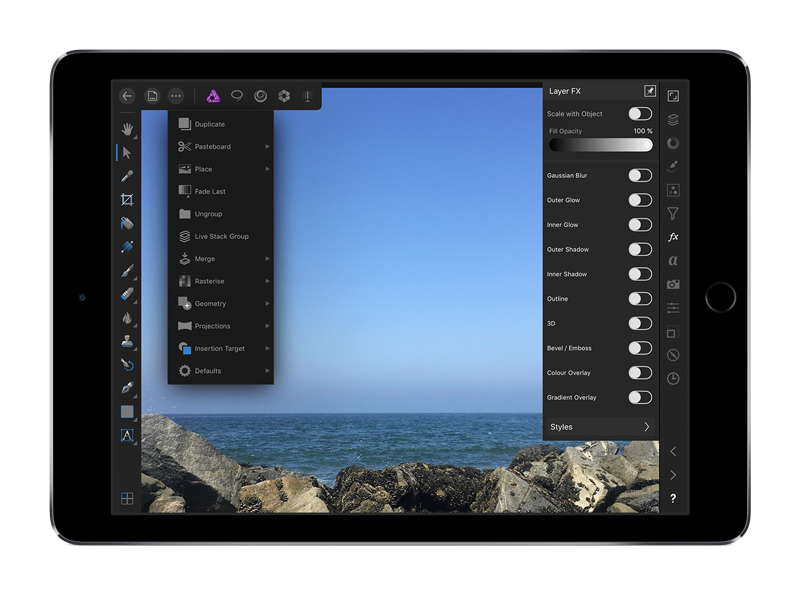 Placing a document requires a minimum of two taps! and poor grouping of Layer based options, leaves users juggling between different menus

One of the biggest casualties of shunning iOS interfaces is the inclusion of circular sliders. Sure, they’re the coolest looking UI elements for a pro app. But they’re astronomically hard to use. Add to that, these sliders are very sensitive to random taps. They can drastically change their values, due to a single accidental tap on the screen. Making it even more difficult to work. I almost always end up using the precision controls. Which shouldn’t be the case if only minor tweaks were to be done.

Sure, they’re the coolest looking UI elements for a pro app. But they’re astronomically hard to use.

Affinity Photo is a powerful tool. There’s no doubt about it’s capabilities. But it’s also one that feels over designed. It’s a software which would have benefited a lot from better grouping, smarter interactions, and a better understanding of the platform it’s being built for. There’s no mistaking that Affinity Photo’s UI Design leaves a lot to be desired.

Does it help in creating a workflow?

All said and done, if an app is usable enough, if its professional enough to provide users with what they “need”, in a package that’s not catastrophically bad, I think there can be some workflow that can be formed around it to achieve certain tasks which it can do faster than its computer counterparts.

Affinity Photo allows that to a large extent. It makes some of the complex image editing tools easier, just because of their focus on a touch-screen optimised interface for selections, retouching and image manipulation.

Having said that, Affinity Photo has a long way to go to displace photoshop on a computer as a primary design tool. For it to be a real alternative, it needs to be faster than photoshop at doing some key tasks that users want, and it should be able to provide a large enough canvas to go from a white screen to a pro-shot.

Coming back to the spectrum of pro design apps on iPad. I’ll rank it somewhere here: 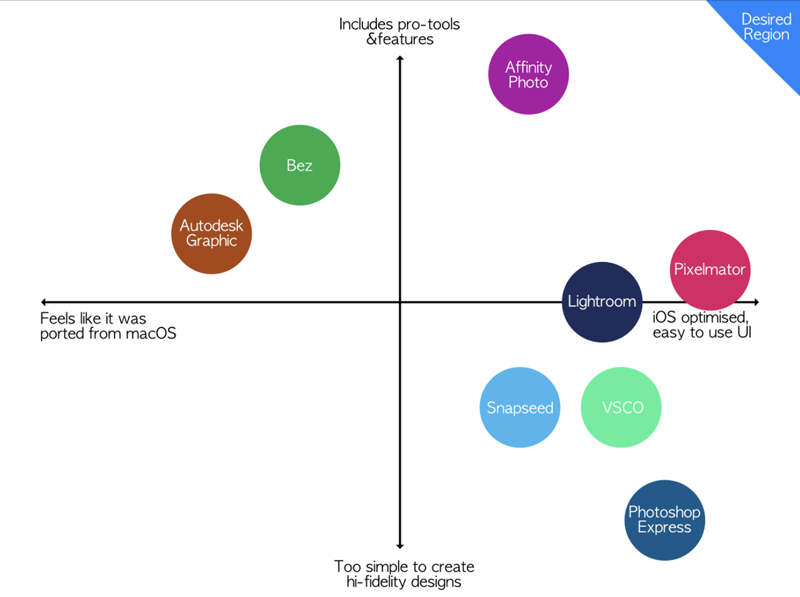